This comes out thanks to https://twitter.com/kingdom4arab or abusuliman11 in the comments who reminded us that we actually never got around to scanlating the Omake bundled with the Kingdom Guidebook and sent us the scanned raws.

For context, Kingdom often publishes guide books where characters have their stats presented.

e.g. Shin might have the following stats (pulled from the Kingdom wiki @ http://kingdom.wikia.com/wiki/Shin#3rd) 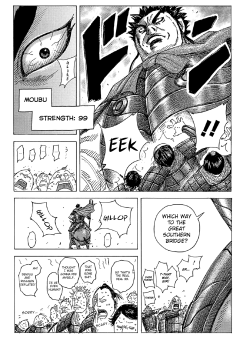 If anyone wants to upload this to mangadex or anywhere else, go for it. I can’t really be bothered.

We get quite a few comments on this site and via our email. The main 3 categories can be broken down in as:

Typically I write up some long-winded reply in the comments (e.g. last one on scanlation quality can be found on:

but in the interest of laziness, I’ve decided to post a response here for once just so I can refer to it in the future.

The problem with scanlation is that the mangaka (in this case: Yasuhisa Hara) does not receive any money from us translating it into English or from it’s increased popularity outside of Japan.

One hopes that raising awareness of a manga would entice an actual publisher to take a chance and publish this in English or other languages but on the other hand, the existence of free translations somewhat counteracts this.

Translations accepting donations or running ads is something so ubiquitous nowadays that it’s hard to take issue with it. Personally, however, I have mixed feelings about this.

Essentially we’re operating in a grey area here, a sliding scale of what is ethical and what is not. Who’s to say how much compensation in donations or ad revenue is ethical before we cross the line into profiteering off of the authors work. Sites like Mangajoy and ReadManga.today are clearly attempting the latter but what about other scanlation groups like mangastream or even smaller groups?

Recently, while bored when commuting to work, I read a few chapters of a Xianxia novel called Coiling Dragon from Wuxiaworld. The site makes roughly at least $500 a month (my estimate) from donators and promises more chapters for each new milestone in donations that is reached.

I have no idea how much mangastream makes but they release shonen jump flagship titles so I’d assume a damn lot. I’m interested if any of that flows down to the people who actually work for them (doubt it).

What excellent business acumen! Except for the fact that it’s not actually legal for them to do so (especially on licensed titles). I vaguely recall a time when Naruto became licensed and mangastream temporarily shut down scanlation on this but then picked it back up due either to its popularity or how much lost revenue it would cost them.

Now, don’t get me wrong, I actually have no problem with this. After all, if mangastream didn’t scanlate Naruto, someone else would have (and they would have made a killing doing it too).

But if a reader asked me whether I thought they should donate to a translation or not, I would tell them absolutely not. We’re not doing this for money and if they are, they’re making money via ads and not relying on your donations anyway.

If you’re really interested in helping out the scanlation scene, learn to actually clean, redraw or typeset. I’m pretty damn sure anyone over the age of 16 should be able to learn how to do these. Unless you’re dyslexic, in which case, stick to cleaning. You will need 2 hours a week to contribute so don’t give me any excuses about not having any time unless you work 3 jobs and are up to 100k in student debt.

But as to whether a person does end up donating or whether translations want to accept money, that’s their prerogative. In the past, we’ve accepted donations to help pay for our raws and server (which I might shut off soon). If we wanted to, I’m actually pretty confident we could have made at least ~$8000 over the last 2 years, particularly if we kept it open when we were doing 8 chapters a week.

Eventually I might turn donations back on just because people keep pestering me and now that we’re no longer working on Kingdom at full speed but if I could turn back time, I still would have deleted the donation widget from the site back in 2013.